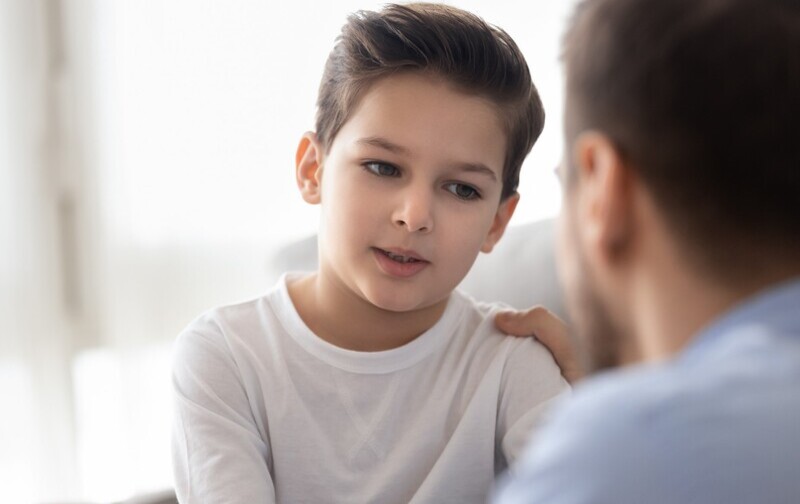 When you raise a child with autism, questions about affection are common. When it comes to autism and touch, each child is different in how they respond to touch. Common questions include, “Are children with autism affectionate?” and “Do people with autism have an aversion to touch?”

Read on to learn more!

Understanding the Response to Affection

Children with autism spectrum disorder (ASD) commonly experience challenges with their social development, such as difficulties in developing play skills, understanding the communication of others, or expressing their emotions, needs, and ideas in conventional ways. For instance, some children with ASD may appear disinterested when engaged in play or in response to affection from loved ones while others may have an overly affectionate child with autism.

Individuals with autism can also have an aversion to touch. Touch can cause a lack of emotional response or may even cause emotional stress and turmoil. Touch aversion in autism can feel uncomfortable for friends and family who are unfamiliar with this common response. The aversion to touch may be misunderstood as a lack of comfort with affection. Children with autism do experience and express affection – some may simply experience and express it differently than others. Understanding how those with autism experience affection and touch can help parents better understand how to communicate affection to their child and how to recognize and respond to their child’s emotions.

How do Children with Autism Express Emotion and Affection?

Affection, whether emotional or physical, is a crucial part of raising and nurturing a healthy child. Challenges can arise when parents with a young child on the spectrum try to express affection in traditional ways. Parents may be discouraged if their child does not respond to affection or play in the ways they expect.

Some children with ASD may display blank or ambiguous expressions which can be difficult to interpret.[i] This tendency has been related to a trait known as alexithymia, which describes the difficulty in recognizing emotions.[ii] A 2015 study found that some interpret the emotional facial expressions of people with autism as exaggerated or otherwise unconventional.[iii] Other children on the spectrum may avoid eye contact or experience difficulty in interpreting the facial expressions of others. A person with autism can exhibit some, all, or none of these behavioral traits.

Do People With Autism Have an Aversion to Physical Touch?

Touch is another common aspect of affection that children with autism may respond to differently than do others. Researchers have discovered that certain brain regions normally stimulated by social touch are less responsive in people with autism. They propose that touch may not be interpreted as socially relevant by some with autism.[iv] People with autism also exhibit differences in nerve fiber activity when touched.[v]

A touch that would be comforting and soothing to someone without autism can sometimes prove uncomfortable and even distressing to some with ASD. This is just one manifestation of sensory processing differences in individuals with autism. Challenges with sensory processing also account for sensitivity to certain sights, sounds, and feelings which can easily become overstimulating, overwhelming, or frightening to those with autism. It would be wrong to suggest that all individuals with autism have an aversion to touch – some may enjoy it outright, and others may enjoy it in certain contexts or forms, such as a preference for deep pressure versus light brushing. Like most traits of autism, a person’s response to touch is individual and should be respected and never forced by others.

Are Children With Autism Affectionate?

Since some children with autism exhibit untraditional responses to emotional affection, as well as a minimal response or aversion to touch, parents may wonder how best to express affection to their child. The answer depends on what makes the child feel safe and comfortable. Most parents are likely doing the right things already.

While parents should not force physical touch if it makes their child uncomfortable, it is likely that a child appreciates the emotional warmth, company, and care their parents provide to them, even if they may not show it in ways parents expect. By looking out for one’s child, providing for them, being there to support them in times of need, and engaging with their favorite activities, interests, and passions, parents are providing the love, affection, and care that their child needs.

Parents can observe which activities their child seems to gravitate to, or what their child responds to well emotionally, and work to hone in on those positive responses. Offering emotional warmth and support is important, even if the child does not show an obvious outward response. Having a conversation with one’s child about one of their interests, watching a favorite show together, or playing a favorite game together can mean a lot to them, and communicates that a parent cares about them.

How Parents Can Help Friends and Family Show Care and Affection

It is important to consider how ASD uniquely manifests in each child and to adjust one’s expectations and parental strategies to make them feel safe and supported. Tailoring one’s behavior and expectations is an ongoing process, where parents will inevitably find what works and what doesn’t through new, and sometimes difficult experiences. As parents learn more about how their child experiences the world, and what makes them feel loved, they can communicate that important information to friends and family.

Friends and family may not always understand why a child with autism may appear aloof or not exhibit affection in social situations. Parents should communicate the particular difficulties their child faces to friends and family, such as a sensitivity to touch or to certain social situations. Parents can also help others to better interact with their child socially by giving them suggestions on activities or topics of conversation that the child enjoys. Some parents find it difficult to have these discussions, but talking about your child’s behaviors and tendencies is a skill that develops with time and experience.

Autism Treatment at Spectrum of Hope

Treatment for autism can help individuals on the spectrum learn social skills which aid them in expressing their emotions, understanding the emotions of others, and communicating their wants and needs. It can also give parents valuable insight and perspective on how autism presents in their child, along with proven behavioral strategies for interacting with their child to aid their development.

Spectrum of Hope has over a decade of experience in treating individuals with autism of all ages. Located in the greater Houston area, the team at Spectrum of Hope will work with you and your child to address their social and developmental challenges, build communication and life skills, and set your child up to thrive across all aspects of life. Please give us a call today at (281) 894-1423.